Before the internet was really the internet, computers were for playing games that hid education behind weird 8-bit characters.

I can’t remember exactly what started my search for PC games from the 90s, but once I typed the words into Google, it wasn’t long before a flood of memories swept me away. When talking about PC games, most 90s kids remember dying of dysentery on the Oregon Trail, but the wagon train game never interested me much. My rainy recesses were more often devoted to Electronic Talking Mall Madness – it was when I was home, or at summer camp, that I would attempt to level up in one of these games:

The Secret Island of Dr. Quandary  From the makers of Oregon Trail – a carnival wizard challenges you to a shooting gallery game, but when you win you’re turned into a kewpie doll and transported to an island of seriously strange shit. A series of math and logic puzzles follow, and along the way you acquire the necessary ingredients to make the Fixer Elixir (including bat guano and a cup of Gobbledy-Gook.) With its loud colors and complete absence of realism, Dr. Quandary was an icon of its time.

Treasure Mountain!  From the lovely folks at The Learning Company (who played a significant role in my early development) came a game in which you attempted to find all the missing treasures and ascend the mountain to deposit them in a big chest. Clues are given by annoying little elves that you capture in butterfly nets, and treasures are gained by depositing magic coins in front of bushes. The attraction of this game was that you got to keep one of the treasures (which were different every time) to display as a representation of your prowess, and your skill levels went up every time you made it to the top of the mountain – as long as someone didn’t come along while you were away and erase your score. Since there was only one computer in the entire school that had this game, you never knew how long you’d hold onto bragging rights. Jetpack  A freeware game published as shareware by Software Creations in 1993, this was *the* game at my summer camp – probably because it was the least educational. Again, relegated to one single computer in the Bungalow, it was worth the wait in line to play. This platform game involved gathering emeralds that looked like platters of jello with the aid of your little jetpack, sometimes phasing through brick walls, avoiding Dalek-impersonators, collecting fuel tanks and golden idols along the way. There was just something about the little avatar’s victory dance that was infectious. 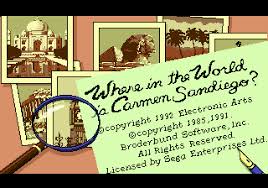 Where in the World is Carmen Sandiego?  Everyone knows about Carmen, mysterious thief extraordinaire – her Rockapella theme song is an earworm. Following the PBS game show, Brøderbund Software released this updated version of the detective game where we had to track suspects all over the world and determine their identity from scraps of paper left lying on the ground. I remember Ms. Sandiego had a sarcastic streak, and she always appeared to be one step ahead. Her henchmen had typically punny names, possibly indicating an overlap with the villains from Captain Planet.

Spelunx  The most elusive game of them all. This one’s unusual in that it ruled my childhood, but I never got to play it. Back when Natural Wonders was still in business, I used to loiter in their stores, examining geodes and Galileo thermometers, and one day they had a computer set up to demonstrate a new game that involved exploring caves. It was Myst for children (made by the same people). Unfortunately I didn’t get the name of the game before I was dragged away, and so spent many years wondering if I’d made the whole thing up until a chance find on an internet forum assured me that I wasn’t crazy.

So if you found your way to this page searching for some long lost computer game from your 90s childhood, rest assured: you’re not crazy either.